AIOTI Secretary-General participated at the 9th Annual Internet of Things conference, Brussels, 15 May 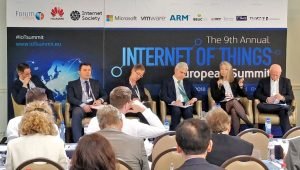 AIOTI Secretary-General Damir Filipovic participated as a panelist at the 9th Annual Internet of Things conference that was held on 15 and 16 May in Brussels.

Damir spoke on the Session 1: IoT and the DSM: Will a European single market for IoT be achieved? What to expect post-2019?

The session was about a key ambition of the Digital Single Market strategy to create and support an appropriate environment for the successful rollout of IoT in Europe. A year before the end of the mandate of the current Commission, this session will be the opportunity to look at what has been achieved through initiatives (including the creation of AIOTI, the Digitising European Industry initiative and the European Data Economy Communication) analyse the state-of-play of IoT in Europe and crucially will explore what remains to be done to boost the take-up of IoT, unleash its potential and create a Single Market for IoT- allowing Europe to become a global leader in its development. This session will serve as an introduction to the rest of the conference.

Questions raised at the discussion were:

– What are Europe’s next policy objectives for The Internet of Things and what can be done to ensure the EU takes the lead in IoT innovation and adoption?

– What existing barriers still prevent the take-up of IoT in the context of the DSM and is new legislation specific to IoT needed to address these challenges?

– What have the different approaches and collaborative efforts in establishing standards for the billions of devices making up the Internet of Things achieved? What further efforts are needed?

– What remains to be done to ensure that data sharing is promoted to support European innovators, allowing them to create new partnerships, reach out to new customers, and establish scalable business models?

-What can Europe learn from the development of IoT in other regions of the world?

What are you looking for?